UPDATE!
The footage of Twisted Oak Coven doing ritual with Christine Jones was featured in the Oct. 28th, 2002 Episode of “Inside Out” on the BBC (British Broadcasting Company) of England.  Although there are no photos of us on the BBC webpage, you can still read all about Sybil Leek, which is what the Episode was about. 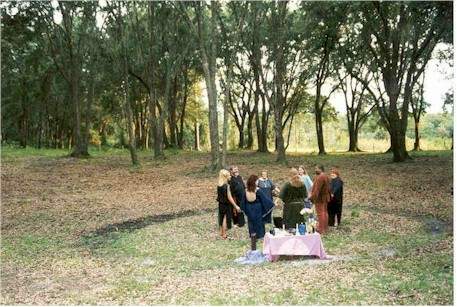 Chris Jones was a local Witch who lived on the East Coast of Florida.  She was an initiate of Sybil Leek.  In fact, she was the care-taker & Nurse of Sybil and was there when Sybil passed into the Summerland.
Chris wrote a Script about the story of her life.   A big part of her life has been Wicca.  As she said, “Wicca has changed her life for the positive.”
Terry Cronin Jr., a local doctor and film short producer, made a “trailer” about Chris and Wicca that was presented at the Melbourne, FL Film Festival on Saturday Sept. 18th, 1999.  The purpose of the trailer was to generate more interest for the production of the full length feature film “January Witch”.
Alexian was asked to do the Theme Music for the Film Trailer (and the Film!), and Twisted Oak was asked to organize a small ritual that was filmed for the movie.   The ritual was only a small part of the “trailer”, but still was an important aspect for impact.
When Twisted Oak was asked to organize the ritual, we immediately sent out announcements to WRCF to notify their members and anyone interested in being a part of the ritual for the film trailer.  (We had a very small turnout.  We don’t know why.)
We’d like to thank the people that volunteered and showed support.  It was a lot of fun, and the elements were with us!  A very strong thunderstorm brewed in the distance ALL AROUND us, but it never rained a drop on us.  We only had wind gusts, and lightning in the distance, which made for a energized ritual.
The people that were there the day of the filming were given special passes to the “closed” Film Festival on the 18th, compliments of the producer Terry Cronin Jr. and Chris Jones.  Thanks!  It was a blast!

As we find out more about the film short and the possibility of the full length feature being produced, we will post it here to this page.