Twisted Oak can trace it’s initiatory lineage all the way back to the New Forest Coven of Witches in England at the beginning of the 20th Century.  Obviously, since we are Alexandrian Witches, we are from the Alex Sanders branch of Wicca that hived off from Gardnerian Wicca.

A note from Maxine to Alexian about the days of Summanus visiting them in England:

Summanus was a delight. It was such a busy coven it was a joy to come home  to find Summanus sitting cross-legged next to a large bookcase in the main hall leading to the Temple. He would be either studying or book binding regardless of the comings and goings that go with the workings of a training group.

Always polite with a knowing glint in his eye he brought serenity to the circle; Alex and I missed  him when he went back to the States always leaving us looking forward to his next visit.

The heart bond was felt by all who met and worked in the circle with Summanus. A pleasure to all. 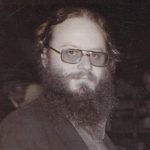 A note from Summanus to Alexian about the days of du Bandia Grasail (Scots gaelic for “…of the Gracious Goddess”) in Boston:

Over forty years ago in August 1970, a small Wiccan coven began its work in Boston. Its formation owed a lot to happenstance, following a series of serendipitous events that summer in England. The story began with a chance visit to the Witches’ Mill museum in Castletown, Isle of Man after a tour of the castle. Impressed by the quality, if not the (neglected) condition, of the exhibits on the upper floors and their message about the survival of the ancient British Witch Cult, we asked the Wilsons about contacting representative witches in America, and Ray Buckland’s card was offered.

Nothing more was done until we chanced across a new film, The Legend of the Witches, at the Jacey Trafalgar Square Cinema. Again impressed by the authenticity depicted by the Sanders’ coven, we bought June John’s King of the Witches at Watkin’s Books in nearby Cecil Court. Using the Manchester contact address in the book, we wrote to Alex Sanders and asked about a possible meeting. The reply, delivered to our bedsit, contained a card, “O. Alexander Sanders” and with a London number to call. Having done so, we were invited to an introductory visit and ceremony on July 25.

After that, events moved speedily. We undertook first degree initiation on Lammas, and second and third a week later on August 8, just before returning to America. A very busy week was spent asking questions copying the Book of Shadows sitting on the floor of the Sanders’ flat (up to 10 hours at a time).

Once back in Boston, we had no thought of doing anything but appreciating the initiated status and the manuscript, but having told co-workers at Mugar Library about our adventure, we were prevailed on to perform a few initiations, so by the end of the month, du Bandia Grasail existed. When three of the new initiates returned to Michigan (temporarily), an ad was placed in the Boston Phoenix on February 2, 1971, in hopes of locating a regional coven to get more training. Although we did not find any previous initiates (until later), the ad did attract a number of membership inquiries, and it was these new members that essentially became the progenitors of the subsequent three covens that succeeded du Bandia Grasail when we dissolved the original coven at Beltane, 1974.

During the years that du Bandia existed, several of us made pilgrimages to England to receive further training and experience from Alex and Maxine, as in the summers of 1971 and 1973. Some members left and others were accepted (in all, 40 people were initiated), including a few who came from some distance to become Alexandrians. We also met with the newer “Algard” contingent of Mary Nesnick in New York, the K.A.M. coven in Baltimore, and others. We disbanded the original group due to personality conflicts, doctrinal disagreements and the pressures of academic pursuits while continuing in an advisory capacity to the daughter covens for a number of years. Du Bandia’s brief span of existence, however, introduced Alexandrian Wicca in the U. S. and has apparently been responsible for the remarkable diffusion of the tradition ever since.

Powered by WordPress and WordPress Theme created with Artisteer.